The Stingy's guide to fun

Post 1:
This is one of my first posts about how I had a lot of fun and did not end up broke. It is about a one day trip to one of the popular hill stations in Maharashtra, called Lonavala. It is about 40 kms from Pune.

Five of us started off in the morning at about 10 am. After an hour long train journey from Pune, filled with discussions about the concept of ‘Free will’ vs. ‘Predetermined Destiny’, fueled by the reading of the book ‘God’s Debris’ by Scott Adams, me and four of my friends reached Lonavala. After some well rehearsed haggling (a talent, nurtured over years of economical shopping in the bylanes of the Fashion Street and Linking Road) with the rickshawwala, we started off in the rickshaw to go around the city and then moved on to Khandala, which is at a 6 km stretch from Lonavala. Even though it was quite sunny yesterday, the place was as charming as ever. First we had some lunch at Kamath (you always manage to find this franchisee place at all the tourist locations in India….) and then moved on to a place called Tiger valley. It had a real great view, with high, pointed rocks and plain plateau forming the two ends of the curve that I silently christened as the “Tiger’s Jaw”. It was striking in contrast to the rest of the area, especially when a huge cloud cast its deep dark shadows over the curve.

The Mumbai-Pune express highway winding through the majestic mountains, covered with thick, lush green jungles provided a nice balance of rustic and the modern. Since we had a friend's digital camera and my camcorder to our generous disposal, a flurry of photo sessions and video shoots ensued. Claiming to be somewhat of an expert at these things (since I have taken the cinematography online course, all the images seem to be analysis charts of shadow and light, color and contrast, focus and exposure and I heap my miniscule, oft-mistaken theories mercilessly, with great pride, on the helpless and the uninitiated.) I was directing people to take photos in a certain way, from a particular angle against a definitive view and even though all of them must have wanted to throw me down the edge fence line that we were sitting and posing upon, they were sweet enough to shoot me those tight, single-line smiles, which I strongly suspect were clever masks for their tightly clenched teeth within.

The only scary factor about that location was that it was at a dangerous curve of road, where the stretch was inclined in a gravity-favoring way and the vehicles had to slow down almost against free fall, with the respective drivers sweating it out to keep control. Thereby our photographic enthusiasm had to be curbed a bit, being restricted to certain spatial co-ordinates and physical positions that suggested minimum danger and reduced the chances of the photo-in-making being dubbed as “The last photo taken by XYZ”.
We couldn't resist the temptation of the melting 'gollas' and relished them hungrily. With maroon lips and stained teeth, we were quite a sight for the sore eyes. Moving up the road, the kulfi seemed irrestible too, the blazing sun making it all too delicious so we had a taste of it too. Then we stopped by a porcelain vendor selling colorful cups, glasses, and other such crockery items at reasonable rates. After much deliberation over the design and the color, three of us settled for three varicolored mugs for office tea times.

Then we moved on to a garden, again with a spectacular view of the other side of the valley. The highway was seen from here too. There was lot many sights to see other than cuddling couples and frolicking kids; like a cactus plant where love stuck had carefully carved out the names of their beloved in its barren and thorny stems. Such a contradiction: the dry cactus used for expression of the most vibrant of emotions, love. There was a cartoonist too, offering caricatures at a measly Rs.40/- but then in my case, his work wouldn’t have had a challenge since I already look like one. So in the view of the greater humanitarian purpose that I had to serve of not making the man feel like his talent was wasted, I decided to give it a skip.

Anyways, some more photo-sessions blossomed in full swing, with all of us, taking turns, in group of 2 or 3, to mimic the act of pushing each other from the top of the mountains, to the best of our acting abilities. It was lot of fun till I began to fear that one of my friends might actually get into the skin of the rogue character that he/she was playing and take the opportunity to end their constant pain (ahem…this is a clear reference to me) and push me over the edge. I cunningly stepped down before it went too far.

Finally we moved to this place called Shooting point, had another amazing view of the mountains and the deep valleys, with a few waterfalls (the rains have vanished for a while, so the scarcity) and meandering streams. To get to the shooting point, there were two ways: one- a relatively steep 50 degree runway down which needed quite some rock climbing skills and the second - a roundabout, safer walk down to the same place with minor challenges such as a few slippery stones. The second one was a better option anyday but then people who know me know that I consciously and subconsciously look for trouble and have a penchant for choosing the less conventional (read: the stupid oaf's way). My smarter friends took the better way and I tried to push my luck too far when I chose the first.

As I began my climb down (this HAS to be mentioned: As a undeniable evidence of my stupidity, I was wearing heels on what could unquestionably be a moronic choice when you know that you are going to a hilly region and would have to do some climbing), rocks started slipping under my feet and soon I was crawling (bottoms down) rather then actual climbing down. Then it got worse as I faced the slope down. Wow...this was it!! Either I go back, which was less tougher and laugh at myself for being such a coward or I take this almost suicidal fall of shame and have others (my friends and some unknown people who were staring from below at me int his moment of indecision...as if waiting and hoping for me to fall) laughing at me. I chose and the next moment was hurtling down the path with demonic speed, imagining how tangled how I look when I crash. My life was beginning to flash in front of my eyes, when suddenly it was over. Yeah, I did it!! But till then my friends and those unknown people had all moved away and I had no one to flash my victory smile at...how unceremonious. Pretending not be affected by this, I moved on.

The rugged terrain on which I stood now, had almost an 80 degree steep fall, punctuated by protruding rocks, uneven surfaces and carelessly grown bushes. It was just breath taking, not to mention that I was already out of breath thanks to my little adventure. Again there was a lonely waterfall here and a few streams nearby. A few picturesque houses were seen on the mountains that enclosed the valley, nestled snugly amidst the glory and harmony of the beautiful nature around. I felt that I should paint that whole scene, but then I when I feel like I want to sing (out of the joy of my heart) and do it, the results often aren't as harmonious (rather others think that they are not, I like to believe that they are just jealous)so I dropped the idea. Instead I just stood there watching the brilliant work of the greatest artiste ever.

Now my friends were again onto their photoshoots, but I, being a person, too tired of all this paparazzi affair and privacy-violating photoshoots kept away from it. It is another thing that none of my friends actually asked me to pose for any pictures then but Whatever. After that it was time to go and I chose the saner way to go up, along with the others. Ah, smart me!!

At the next point there was a dam but since no photography was allowed and we refused to part with our precious equipment, we had to turn back. Anyways we argued, what is the big deal with a dam, a few turbines, some high walls and a bit of equipment - nothing really worthwhile so we gladly spent our time doing the more important stuff - food. We had some cotton candy, few gulps of ice slush and 'butta', all worth the 'dam' time.

We asked the rickshawwala to take us back again to the station, which he promptly did. It was just a matter of 10 minutes before the train arrived, while we discussed our lovely day.

After the train journey from Lonavala to Pune, we walked down from the station towards the bus stand, an almost 15 min stretch away and there luckily found the bus home, almost immediately. Again it was a walking distance of about half an hour till we reached home, but it was so entirely delightfulIy amidst the teasing and the harmless jokes, whilst enjoying the beauty of the sunlit sky that we didn't realise it at all. By now, the looming clouds had begun to turn a darker shade, threatening to pour out at any time. The sky looked like a pregnant woman whose water was about to break. And in time it did too. But by then we were snuggling in the cosiness of our homes with a faintly tired body but a wildly invigorated mind, listening to the thundering music outside accompanied by the elusive rain. It was just 7:30 pm.

The whole trip cost us about Rs. 100/- per head (excluding the food expenses-lunch, gollas, kulfi, cotton candy etc., again not very expensive), Rs. 500/- in total. We decided to go by train, instead of private vehicle, haggled with the rickshawala for a reasonable charge, used the bus - when in normal circumstances we would have opted for rickshaw and walked when it seemed like fun. It all turned out well plus we could fancy ourselves to be people who might make some smart investments in the future. A great trip and a good ego boost - all in a day's time.

Here are some details of the expenditure:

Rs. 104/- (Train ticket to and from Lonavala to Pune station for 5 people)

Rs. 66/-(Miscellaneous - bus to and from Pune station to residence, pack of chips and biscuits shared by all) 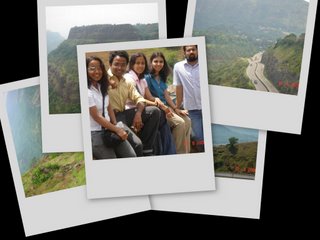 Posted by Aimless Archer at 3:04 AM

I believe a shorter post would have done more justice than just rambling about your experiences. Full of cliches. You can do better than that.

This is nowhere compared to your other posts.