Motorcycle Diaries - A journey worth taking 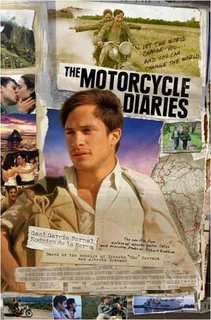 Oscar nominee in the Best Foreign movie category, this is one film that would do well even without the translation, with such an interesting and inspiring a premise as the beginning of the making of the legendary Che Guevara, the fire that sparked the Cuban Revolution. The story is about the 23-year old Che (Ernesto) and his biochemist friend, Alberto Granado as they undertake a bike trip around Latin America. Initially, it is an amusing account of their adventures and escapades but later turns on a serious note as they slowly come to terms with the suffering of the natives and identify the crisis and the vices of the capitalist domination. It was this journey that sowed the seeds for the future of Cuba and changed the destinies of the natives forever.

The cinematography in this movie is hauntingly beautiful as the camera pans effortlessly across the varicolored contours and the diverse cultural scenarios of the picturesque Latin American countries; instilling a wonderful earthiness in the movie with the sounds, the smells, the traditions of these lesser known lands. It is truly breathtaking at times.

The lead actors have done a superb job with their unassuming performances, subtle yet so real. Especially Gael Garcia Bernal, whose charismatic screen appeal and intense persona most certainly makes him a true to life young Guevara. Rodrigo De La Serna as the chubby, horny and harmlessly cunning Alberto Granado keeps you smiling throughout with his playfulness and wit. But it is really the director, Walter Salles, who has to be credited for creating such a impressive work of art incorporating the talents of not only the professionals but also of some of the natives who bring such authenticity and credibility to the movie that it almost feels like a documentary at times. He should be applauded for introducing a new kind of documentary-commercial-art kind of cinema. Kudos for a movie nicely made, with no pretensions, just all heart, soul and spirit.

Trivia: How Motorcycle Diaries is truly one of its kind

The film was an international co-production between companies in Argentina, France, Germany,Peru,United Kingdom and the United States. Ernesto Guevara is played by the Mexican actor Gael García Bernal and Alberto Granado by the Argentinean Rodrigo de la Serna.The film was directed by the Brazilian filmmaker Walter Salles. The screenplay, written by acclaimed Puerto Rican playwright José Rivera, is based on Guevara's and Granado's journals. The soundtrack was produced by Gustavo Santaolalla, an Academy award winning Argentinean composer.

Movie Tagline: Let the world change you and you can change the world.

Get a glimpse of Che Guevara’s inspiring life at http://en.wikipedia.org/wiki/Che_Guevara

P.S. Maybe a long road trip is what I need to find out what I want to do with life; I might find a purpose to me too just like Che.
Posted by Aimless Archer at 12:51 PM

Today we had our movie presentations, and this movie was one of the well presentated analysis...