Children of Heaven : The delight of innocence 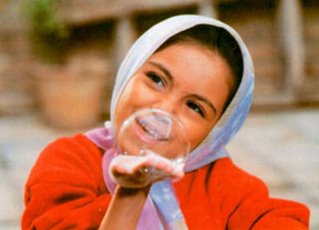 This is a delightful story of a little kid, Ali and his younger sister, Zhara whose lives are thrown into unexpected difficulties due to the loss of the latter’s shoes. Charming in its wholesome innocence and beautiful in its portrayal of human emotions, this movie engages right from the first scene where the cobbler mends the little girl’s shoes.

The movie brings back the warmth of the childhood, when such little things mattered so much and when we were blissfully unaware of the greater problems in life. It made me wanna forget who I had become and escape to those days in the past when everything was just what it looked like – simple, uncomplicated. The children in the movie are so refreshingly natural and shorn of pretenses that it feels like you are actually watching their real life. It is wonderful to actually see children acting out their own age rather than being some kind of stand-up comedians, acting like they are grown-ups with a heightened sense of humor and urgency to display the entire plethora of emotions, while desperately trying to look ‘oh-so-cute’.

Other than the childhood vagaries, we also get a glimpse of the Iranian lifestyle, their customs, traditions and beliefs, presented in a non-judgmental fashion. Apart from the two little protagonists, the other characters have also been acted out minus any loud ‘character’ acting, powerful one-liners and so-called sizzli

ng chemistry. I feel short of words to describe how refreshing that is - to see a movie that so closely resembles life, ordinary yet special, uneventful yet important.
Look out for these two scenes that are nicely done:

Ali and his sister Zahara, playing with bubbles while washing the shoes.
The last scene in which the red fish collect around Ali’s feet in the pond.

Give yourself a break from the extravagant Hollywood and Bollywood brouhaha and watch this low-budget, emotionally satisfying charmer…
Posted by Aimless Archer at 5:59 AM