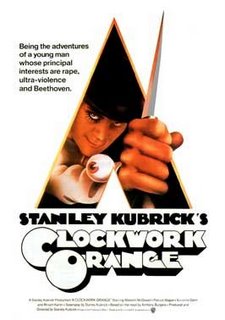 Stanley Kubrick’s bold and theatrically dramatized version of the future perfect delinquent and maniacal “adventures of a young man whose main interests being rape, ultra-violence and Beethoven” is a revelation of the sort of bravura film-making that excites, disgusts, scares and awes at the same time. After watching this movie, I knew why Kubrick is so revered amongst directors of all ages and races and why he is amongst the greatest directors ever born. The unflinching quality of his vision and his absolute determination to keep its artistic integrity alive without any compromises or concessions to his perspective is what makes him one of the towering artistes of all times.

The story is about Alex (Malcolm McDowell in the role that got him the 100th spot on the Top100 performances of all times) who is a delinquent crime-scene regular, with absolute disregard for law and society. With his band of ‘brothers’, he commits rapes and robberies with the delight and indulgence of a little prankster doing his routine mischief. One day, the mischief goes too far and Alex is imprisoned for murder. In the prison, he is given a chance to go free if he undergoes a revolutionary new treatment for complete reformation of the criminals. After the treatment, Alex’s behavioral preferences are altered but then the questions about the morality of the treatment, its torturous after- effects and choice by coercion arise. A singular incident in the end changes things again and we are left with a bizarre dream sequence of the protagonist, considering what the probable outcome of the whole exercise could be.

Saying that the movie SHOCKS is an understatement. There are rape scenes and fights, choreographed with background scores, robberies committed while ‘Singing in the rain’ and fast forwarded orgies. Most of the women in the movie are either completely undressed or pictured topless with the director never holding back on showing us the perverse and sadistic imagination of the protagonist at any point of time in the movie. Not to mention the scores of innuendos and allusions those that are carefully hidden beneath the obvious, this is one movie that deals with underage crimes, lawlessness, politics, morality, justice and surprisingly even science-fiction with thought provoking insight.

Apart from bold subject, daring direction and tremendous controversy, the movie also holds the distinction of being one of the two X-rated movies to be nominated for the “Best Picture” Oscar. There are a lot of interesting anecdotes pre and post the release of the movie, with the X-rated version being banned in UK till as recent as 2000 and the Catholic church tagging it as “C” (Condemned) when it was released.

But what really needs to be told that this kind of cinema is liberating in many ways. It depicts the truth and the possibilities of reality in the ‘in-your-face’ kind of fashion which is very rare, not to mention quite alarming and at times sickening to audiences like me who are used to having torture and crime been shown in a ‘held-back-to-avoid-hurting’ the audience’s sensibilities way. I have to admit I was completely taken aback by the rather sensational picturization of most of the scenes but along the way realized that it was important for the message to get across as memorable and hauntingly as it did. The futuristic sets, the outrageous décor, the flashy costumes and the bizarre poetic dialogues add to the ‘retainability’ quotient of the movie quite impressively. The cast does a great job too but the one thing that leaves an indelible imprint on your mind is the sheer courage of the director for creating such a visual stunner with steadfast conviction, unmindful of the business aspect and social acceptance, but extremely fastidious about the artistic integrity of the work.

Posted by Aimless Archer at 5:20 AM